Hello to the Bob Enyart Live family. It is with a heavy heart that we announce, as some of you may have heard, that Bob went to be with the Lord on Sunday Sept 12th, 2021. If you'd like to celebrate Bob's life, you're welcome to join his family at the memorial service on Saturday Oct 2nd, at Applewood Baptist Church in Wheat Ridge Colorado. Doors will be opening at 9:00 a.m. If you'd like to support the family, please pray for comfort and healing. And if you'd like to help financially, please donate at kgov.com/store. We'll be back with more news about the future of Bob Enyart Live soon. For now, enjoy this rerun of a recent episode. God bless.

Press release:
Pastor Bob Enyart, Known for His Unwavering Pro-Life Work, Daily Radio Show, and Christian Ministry Has Gone To Be With the Lord at the Age of 62

ARVADA, Colorado, September 14, 2021 – Following a week of caring for his wife Cheryl’s COVID-19 symptoms, Bob Enyart checked into Lutheran Medical Center in Wheat Ridge, Colorado on August 28, 2021. While in the hospital, his condition declined and he was eventually moved to the ICU with pneumonia on September 1. Despite the efforts of the hospital staff, his health continued to deteriorate and he eventually died on Sunday, September 12 at 3:00 p.m.

Pastor Bob became a follower of Jesus in his youth and his most enduring legacy will be those he led to Christ.

Teaching the truth of God’s Word was Bob’s foremost dedication. As pastor of Denver Bible Church, he would sometimes say, “If I could ask God any question and receive a response, I’d ask, ‘which of my teachings are wrong?’” He loved to study and debate theology. To Bob, ascertaining truth was paramount.

He garnered nationwide recognition with his television show “Bob Enyart Live,” which ran from 1994 until 1999. Though his program later shifted to radio, Bob’s unique style and extraordinary message remained the same. He tirelessly shared the message that this generation is dying in sin and needs the Savior, abortion is murder, and that people should flee government schools, abandon immorality, abhor what is evil, and love one another.

Over the years, Bob was often asked to participate on other programs including Politically Incorrect with Bill Maher, where he jumped at the opportunity to mock Jimmy Kimmel, Larry Flynt and others to their faces.

He was a tireless worker, and despite the importance of his work, would often drop everything at a moment’s notice to help someone in need.

Still, his proudest achievement was that of his role as husband and father. He is survived by his wife Cheryl, their seven sons, three daughters-in-law, seven grandchildren, his mother, two brothers, one sister, and countless nieces, nephews, and extended family. He was surrounded by his loved ones who fought his illness with him until the very end.

*Today we present the return of a classic show. 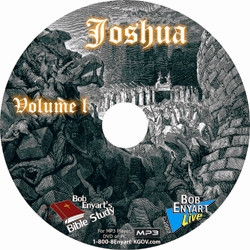 * Joshua: After the death of Moses, God calls on Joshua to lead the Israelites across the Jordan River and take possession of the promised land. God guarantees victory in the military campaign and vows never to leave the Israelites so long as they obey his laws. Available on MP3-CD or download.

Today's Resource: Please consider one of our monthly subscriptions that will not only help support BEL, but they also promote better understanding of the Bible and will equip you to be a better witness to those around you.

Monthly Sermons: Enjoy all of Bob's sermons from the month on Sermon Video DVDs, great also to watch with the family. Or, get these on Sermon Audio CDs which are standard audio Compact Discs that will play on any CD player including the one in your car. Or get them on a single Sermon MP3-CD which will play on an MP3 player, in a DVD player, or in your computer.
Monthly Bible Studies: Enjoy the Scriptures with Bob's Monthly Bible Study DVDs, great too for a small group Bible study. Or get these teachings on a single Monthly Bible Study Audio MP3- CD which will play on an MP3 player, in a DVD player, or in your computer.
Monthly Topical Videos: Coming to your mailbox, you'll get a Monthly Topical DVD to enjoy one of Bob's great videos specially selected to be entertaining and to teach about life from a biblical worldview.
Monthly Best of Bob Shows: Every month our crew selects the eight best BEL shows of the month and for the folks who might have missed some of them, we mail them out on the Best of Bob MP3-CD.
Monthly BEL TV Classics: Enjoy Bob Enyart's timeless, popular TV show delivered to your home on the Monthly BEL TV Classics DVDs with great audio and video clarity thanks to our state-of-the-art mastering from the studio-quality Sony beta tapes to DVD!
Monthly Donation: For folks who just want to make sure that Bob Enyart Live stays on the air, please consider making a pledge in the form of a Monthly Donation.

11d ago1w ago
Subscribe
Unsubscribe
รายสัปดาห์
Heritage Baptist Church exists by the grace of God and for the glory of God, which is the ultimate purpose of all our activities. We seek to glorify the God of Scripture by promoting His worship, edifying and equipping the saints, evangelizing the nations, planting and strengthening churches, calling other assemblies to biblical faithfulness and purity, encouraging biblical fellowship among believers and ministering to the needy, thus proclaiming and defending God’s perfect law and glorious ...
F
Fr. Larry Richards of The Reason For Our Hope Foundation Podcast

25m ago25m ago
Subscribe
Unsubscribe
รายวัน
Fr. Larry Richards is the founder and president of The Reason for our Hope Foundation, a non- profit organization dedicated to "spreading the Good News" by educating others about Jesus Christ. His new homilies are posted each week.
A
Aspire Church Manchester UK - Sermons

1d ago1d ago
Subscribe
Unsubscribe
รายสัปดาห์+
Catholic Answers Focus, the world's premier podcast on Catholic apologetics, helps you explain and defend the Catholic Faith. If you want to take a deep dive into the reasons behind Church teaching, Catholic Answers Focus is for you.
H
Hillsong South Africa's Podcast

4d ago4d ago
Subscribe
Unsubscribe
รายสัปดาห์
Thank you for joining us for another great podcast today! Here you'll find many encouraging and challenging messages to help you build a life of significance! Keep coming back to listen to all the latest messages from Hillsong Church South Africa. We would love for you to rate our podcast, subscribe, perhaps write a review and share the channel with all your friends to help us build a Church that Builds a nation.
J
Joyce Meyer Ministries TV Podcast