The Reason Interview With Nick Gillespie « »
Virginia Postrel: When Calico Was Treated Like Cocaine 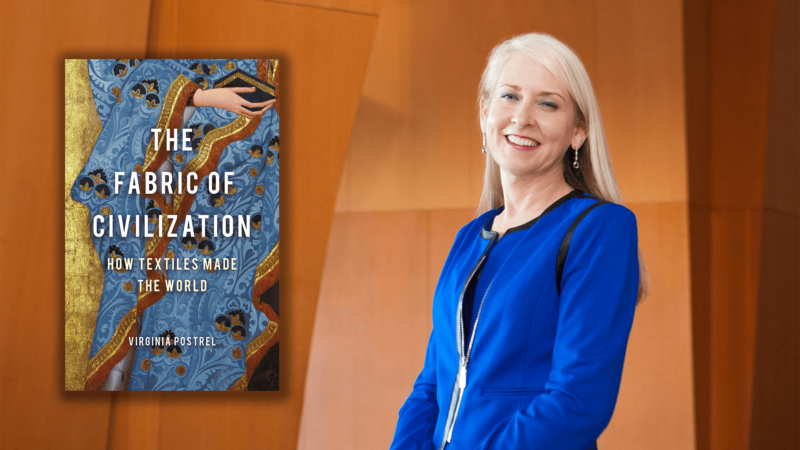 "From the moment we're born, we're surrounded by textiles," says Virginia Postrel, author of the new book The Fabric of Civilization. "It's not just our clothes, it's our blankets, it's our curtains. It's our bandages. It's our duct tape! There are more textiles than you can ever think about surrounding us. And we don't think about them very much."

A former editor of Reason, Postrel is also the author of The Power of Glamour, The Substance of Style, and The Future and Its Enemies. Her new book is a thick history of a technology that is absolutely central to our daily lives and yet one we take for granted. By focusing on fabric, she is able to tell a fascinating story about economics, politics, trade, industrialization, and centuries' worth of disruptive technology.

For instance, she notes that in 17th- and 18th-century Europe, countries banned the importation of super-soft, super-colorful cotton prints from India known as calicos because they threatened domestic producers of everything from lower-quality cotton fabric to luxury silks. "For 73 years, France treated calico the way the U.S. treats cocaine," she says. "There was this huge amount of smuggling, and they were constantly ratcheting up the penalties [so] that they got quite grotesque, at least for the major traffic." Some of "the earliest writings of classical liberalism are in this context, people saying not only is this not working, but…it is unjust to be sentencing people to the galleys in order to protect silk makers' profits."

"Human beings live in history and we inherit the legacies, positive and negative, of that history," says Postrel, discussing the large themes of her work. "All you can do is start from where you are and try to do better from where you are."

She tells Nick Gillespie why polyester is far cooler than its reputation, why she's frustrated with libertarians who "want to make the world be like a clean sheet of paper," and why, despite pandemics and threats to liberalism everywhere, she is optimistic about the future.