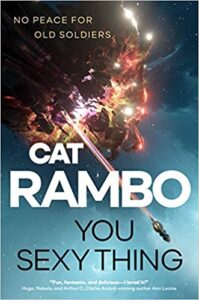 This week, Patrick and Tracy welcome Cat Rambo, author of YOU SEXY THING.

About YOU SEXY THING: TwiceFar station is at the edge of the known universe, and that’s just how Niko Larson, former Admiral in the Grand Military of the Hive Mind, likes it.

Retired and finally free of the continual war of conquest, Niko and the remnants of her former unit are content to spend the rest of their days working at the restaurant they built together, The Last Chance.

But, some wars can’t ever be escaped, and unlike the Hive Mind, some enemies aren’t content to let old soldiers go. Niko and her crew are forced onto a sentient ship convinced that it is being stolen and must survive the machinations of a sadistic pirate king if they even hope to keep the dream of The Last Chance alive.

About Cat Rambo: Cat Rambo lives, writes, and edits in the Pacific Northwest. Their work has appeared in such places as Asimov’s, Weird Tales, and Strange Horizons. They were the fiction editor of award-winning Fantasy Magazine and appeared on the World Fantasy Award ballot in 2012 for that work. Their story “Five Ways to Fall in Love on Planet Porcelain” was a 2012 Nebula Award finalist.

Rambo has over 250 short stories published and has been shortlisted for the Nebula, Compton Crook, and World Fantasy Award. In 2020, their novelette CARPE GLITTER won the Nebula Award. In 2021, they published fantasy novel EXILES OF TABAT (Wordfire Press) and space opera YOU SEXY THING (Tor Macmillan)

A frequent volunteer with the Science Fiction and Fantasy Writers of America, they are a former two-term President. They run popular online writing school The Rambo Academy for Wayward Writers.

The post Episode 517-With Cat Rambo appeared first on The Functional Nerds.

22h ago22h ago
Subscribe
Unsubscribe
รายสัปดาห์
Jump in the Funhaus Podcast -- all the gaming, nerd culture, and meat-packing industry commentary you can handle. Watch LIVE every Tuesday at 4PM CT on svod.roosterteeth.com. Watch the free video version at YouTube.com/Funhaus.
N
Nerdette

4h ago4h ago
Subscribe
Unsubscribe
รายสัปดาห์+
Nerdette is a weekly interview show that helps you unwind with fun conversations, inspiring ideas, and delightful recommendations. And join us every month for the Nerdette Book Club!
L
Ladies First with Laura Brown

10d ago1w ago
Subscribe
Unsubscribe
รายสัปดาห์
From Laura Brown and the Editors of InStyle comes a podcast dedicated to and inspired by the women who are consistently brave, kind and curious. The ones who empower other women and know how to get things done. Following the tone of InStyle, it’s not just celebs for celebs sake; it’s the ones who have something to say. It’s not just fashion for fashion’s sake; it’s about style and how to make it yours. In weekly interviews, Laura shares the mic with the changemakers and rulebreakers making w ...
A
Android Developers Backstage

17d ago2w ago
Subscribe
Unsubscribe
รายเดือน+
Android Backstage, a podcast by and for Android developers. Hosted by developers from the Android engineering team, this show covers topics of interest to Android programmers, with in-depth discussions and interviews with engineers on the Android team at Google.
T
The Big Fight

7d ago0w ago
Subscribe
Unsubscribe
รายสัปดาห์+
Tempers fly as the newsmakers of the week face-off in this award-winning show. Anchored by Sanket Upadhyay, this weekly program has politicians battlling wits with a live audience.
P
Phones Show Chat

16h ago16h ago
Subscribe
Unsubscribe
รายสัปดาห์+
The iFanboy.com Comic Book Podcast is a weekly talk show all about the best new current comic book releases. Lifelong friends, Conor Kilpatrick and Josh Flanagan talk about what they loved and (sometimes) hated in the current weekly books, from publishers like Marvel, DC, Image Comics, Dark Horse Comics, BOOM! Studios, IDW, Aftershock, Valiant, and more. The aim is to have a fun time, some laughs, but to also really understand what makes comic books work and what doesn’t, and trying to under ...
T
Techno Buffet Podcast

7d ago1w ago
Subscribe
Unsubscribe
รายสัปดาห์
Hungry for Technology Talk? Get All You Can Eat at the Android Buffet
R
Rooster Teeth Podcast